Planning well in advance, I got my wonderful parental units to supply me with a shit-tonne of the instant pudding necessary to make the cookies. The also brought along some chocolate chips to make my ordering load lighter.

I can't believe we're making them today. Not because it's Friday the 13th, but because this week has been so incredibly intense and it's only been like four days long.

I want to do a 'real' post about this.. complete with pictures and all that, but for now I'll just fill in the outline.

Last weekend was a sort of mess. Friday, I didn't go to work, but instead to Kobe where I was made an official Goodwill Envoy of Hyogo Prefecture. This just means that wherever I go I should spread the good word. This is easy; I'm liable to pimp out anything I think is truly any good (someone once told me I would be a good saleswoman when I vehemently extolled the virtues of some thing or other.. but the truth is I can only sell something I really know and love).

So that just meant no school that day. Saturday was supposed to be a school day, sort of.. we were to go to work and then after an hour of hanging out at school, go and watch kids compete all over town in various taikai things against the other schools (then get Monday off as a trade in day). But Saturday got rained out so hard they called in an O-ame (too much damn rain) warning, which cancels school in the city. (This happens way more than o-yuki, or too much snow warnings, actually... seriously, imagine a place where rain cancels school more often than snow does!)

So Saturday got pushed to Sunday, and we still had Monday off... I had a visitor in town to hang out and see the taikai, and we thought go to the beach Sunday, but no cigar.

Long story short, it was planned to be a sort of schedually challenged weekend and became EVEN MORE SO because of the rain.

This thrust me into Tuesday's 'last lessons day' at Small Elementary with little mental preparation (since I had Monday off and work on Sunday? I don't know). And then suddenly everything was happening at once. Tuesday was an exhausting run of six class periods conducted for all grade levels, including kindergarten, made heavy with the knowledge that it was the last one for each and all of them. By the end of the day I was a ragged mess. Wednesday was first-year classes back at the middle school (Mario Kart game ftw), and Thursday was the actual last day at the bigger elementary school, which left me less wrecked by still glad I wore waterproof mascara.

I felt better at the bigger school because they made a bigger deal of things.. I felt okay about crying because I could tell they wanted me to cry. They were doing things with the express purpose of making me cry. Then the entire school "hana-michi" style harassed me all the way to the front door. It was exhilarating, and exhausting. More about all that later when I get the photos ready.

In an oddly fitting gesture from the universe, the little girl who walked into the office on perhaps my first day (she was a second grader then) was in the office again during the end of my last day. She was the first student I have memory of speaking directly to; as a second grader she came up to me and told me that I was cute (which was a shocking thing to hear from an adorable second grade girl willing to walk right up to you), and gave a sort of botched self-intro in English. She's one of the special needs kids and is absolutely precious still. She's a fifth grader now and she thanked me for the time I've spent there before I slipped out to put all the presents I'd gotten near my desk at the middle school.

And since I realized (that afternoon) that I was going to be making cookies the very next day, I decided to just get all that stuff when I had my car, which I would on Friday, because I would need to transport said shit tonne of pudding mix (not heavy) and 5.5 kg of chocolate chips (kinda heavy) along with a few other odds, ends, and things.

So yeah. It's been a short week (too short... I almost wish I'd had Monday) and now I'm facing this weekend when I will rent that giant effing van I once drove, roadtrip to Shikoku with some of Shiso-plus-Alessandro, and go rafting and canyoning again.

All that because it's a three-day weekend, which leads into another too-short (blasphemy, I know) week, which is the last week of this semester, the last week of my job in any actuality. Ending ceremony is the 20th, the day after our Salamander farewell dinner which is the same day as the BOE last 'greeting' for which I'll get out of school early (I am never sure these days whether skipping school time is a good thing anymore)...

There is no time to think, little to plan, and I feel like I should have seen this coming, but I didn't realize it would come on so fast! I know there will be another quieter period once the school year ends (after my 'word' at the closing ceremony, etc.) for me to pack and clean and sort, but the way all this descended in a rush makes me feel like I should be packed and ready to go, like, tomorrow. Which just adds to the sense that there was probably a time to think and feel and plan, and that time has come and gone while I was marveling at June and how for the first time it wasn't a shit show. Whatever was missing from June has about hit the fan and here we are up on the final countdown.

So some moments I'm really happy, and some moments I'm hearing a song I just discovered on a CD I unearthed in the packing process and it's making me cry. And some moments I'm feeling relieved that I don't have to plan for/worry about/English educate this or that group anymore -- that their enthusiasm for or knowledge of English is no longer my responsibility. Other moments a particular face will come to mind.. a kid or a teacher, and I'll have to forget for the moment how much it sucks to leave a place.. how much I always did hate graduations.

One of the third graders summed it up pretty well at my send-off ceremony. "She's crying! Look! Now she's smiling. [confusion]" There's that saying, don't cry because it's over, smile because it happened. But I was always one to have it both ways.
Posted by Em at 12:26 PM 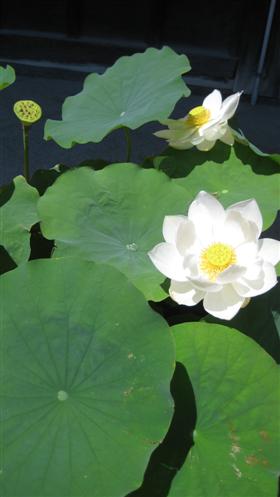 Bloom where you are.

What I wish I were Reading

It Doesn't Matter, It's In The Past